Home/Tea/More than 1000 years of tea ceremony

710 At the beginning of the Nara period in Japan, tea is already being cultivated in some temples and consumed by priests and nobles as a healing drink.

729 Emperor Shoumu introduces a religious ceremony called Incha. During this ceremony, the monks are given tea for their meditation.

760 The first known work of a Buddhist priest named Lu Wu is written. This work includes the first methods for proper preparation, the use of tea cups as well as the temperature of the water.

794 In the beginning of the Heian period in Japan, Kyoto becomes the center of the Japanese tea ceremony.

1053 The book Cha Lu is written by Chinese calligrapher Tsan Hsiang. In this work, Tsan Hsiang refers to the production of powdered tea, the precursor of the Matcha green tea, which was later used in the Japanese tea ceremony.

1107 The chasen, a tea-beater for matcha preparation, was first mentioned by Chinese emperor Hui Tsung in his book Ta Kuan Cha Lun. Here, the detailed preparation of the powdered green tea has already been described.

1191 After Myoan Eisai left Japan for China to study Buddhism, a few years later, he returned with tea seeds from China to plant in northern Kyushu.

1211 The book Kissa Youjouki (Stay Healthy by Drinking Green Tea) is written by Eisai and describes many aspects of the rapidly growing tea consumption.

1324 Emperor Go-Daigo Son of Emperor Go-Uda held an important tea collection for nobles and shoguns in his palace.

1343 After some turmoil, the ban on tea gathering was lifted again.

1416 The house of the first prince Fushimi of a branch of the imperial family holds an important tea-gathering.

1476 A large book and very comprehensive book Kundaikan Socho-ki was written by the poet, painter and adviser to the Japanese tea ceremony Noami. Kundaikan Socho-ki contains descriptions and drawings of tea utensils and ink paintings.

1548 The Tennōjiya kaiki diaries on tea collections from three generations are written by Tsuda Sotatsu.

1555 Takeno Joo a master of the Japanese tea ceremony and teacher Sen no Rikyu dies.

1591 Following political upheavals, Sen no Rikyu is sentenced to religious suicide by Toyotomi Hideyoshi. The last words of Rikyu were written down as Fers:

Long in my possession,

The time has come at the end.

skyward, I throw it up.

1625 The construction of the imperial villa Katsura was completed. The property consists of a Shoin Villa, a teahouse and a brilliant landscaped garden.

1700 The book Chawa Shigetsu Shu is written by Kusumi Soan.

1811 The origins of Seto Ware are described in the book Seto-Toki Ransho by Matsudaira Fumai.

The imprint of the Japanese tea ceremonies of different epochs

Drinking green tea has been known in China since about the fourth century and reached Japan during the Tang Dynasty around the sixth century. At that time, the two countries engaged in an intensive cultural exchange and the first tea seeds reached Japan.

However, it took until the eighth century until the tea ceremony in Japan for the first time in writing was mentioned. However, it can be assumed that the ceremonial ceremony at that time had little in common with today’s process. Historians believe that the Book of Cha-ching by a Buddhist priest largely influenced today’s style of the Japanese tea ceremony.

In the course of the Japanese Nara period (710-794), tea was cultivated or grown in a few parts of Japan and was used predominantly by priests and nobles as medicine. As a result of the negative developments in the relations between the two countries, the Japanese were forced to develop and shape their own forms and traditions. 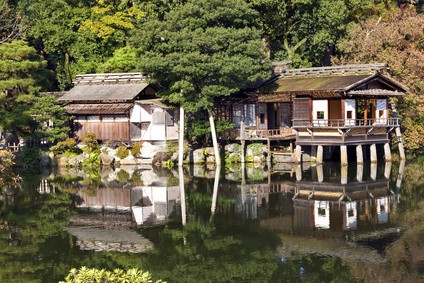 During the Nara period up to the Heian period (794-1192), tea was considered a rare and valuable commodity, which entailed a concept based on rules and formalities. It was not until the founder of Zen Buddhism Myoen Eisai returned from his studies in China and built the first temple of the Rinzai sect that the foundations of the Japanese tea ceremony as we know it today slowly formed.

Eisai transformed the use of tea from medicine to religious drink. It was also Esai who created another milestone in Japanese ceremony culture in his book Kissa Yojoki (Staying Healthy by Drinking Green Tea). He assumed that drinking tea has some health benefits and cures. According to Eisai, tea has become a cure for all diseases and this may be the reason for the rapidly developing popularity.

Tea was mainly grown in the Uji district and began to spread throughout the Samurai in the thirteenth century from there throughout Japan. The Samurai contributed significantly to their further development and popularity through their love of the tea ceremony. Presumably, this custom, a transfer of the tea cup, goes back to the samurai class.

These hosted huge tea parties that tested the ability of guests to distinguish between real tea and other teas. Fast betting accompanied the event and valuable prizes were handed over to the winner. It developed a steadily growing contest first with ten cups of tea, then twenty, thirty and finally one hundred cups of tea. Since it is unlikely that each participant 100 cups were provided, the guests were very likely to go from cup to cup.

The Muromachi period was marked by various architectural transformations, from the formal style of the Heian period to the simplified style of the samurai. Another transformation from samurai style to shoin style, which incorporated some elements of temple architecture, was the tea ceremony during that time. Various design elements of today’s tea ceremony in Japan, such as the Tokonoma or Tsuke-shoin, have their origins in the same Muromachi period.

Likewise, the tatami mat that serves to cover the floor, has its origin in Shoin style.

The founder of the Chanoyu ceremony and Zen priest Murata Shokou was considered one of the finest tearoom designers and became known as the father of the tea ceremony. While the nobility enjoyed the tea ceremony of the Samurai class, Shokou’s disciples began in smaller and fewer

lavish rooms small tea events that were appropriate to their status. Murata Shokou joined the priesthood of the Shoumyou Temple at the age of eleven and left it at the age of twenty to practice Zen meditation with teacher Ikkyuu Soujun.

After receiving an award for his deep understanding of Zen, Murata Shokou spent the rest of his life in a tea room in Nara to perfect the tea ceremony and teach classes to interested students.

Murata Shokou preferred the intimate and personal atmosphere of a small room, with a maximum of five to six guests. In a letter to a student he outlined his very own concept of the Chanoyu ceremony and his own philosophy of aesthetics. His idea of simplicity, the understanding of aesthetic quality of sober ceramics from Bizen and Shigaraki, underscored his efforts to find, study and teach the best combination of Chinese and Japanese tea utensils.