Since the introduction of the green tea in Japan, the first ceramic culture has also been created, which Japan from Yixing reached in China. From this time began the first production of Japanese teapots to prepare Sencha. The design of the Japanese tea pot continued to develop rapidly, differing significantly from the Chinese model.

The best known potter places include Banko in Mie Prefecture (Banko Yaki), Tokoname in Aichi Prefecture and Hagi in Yamaguchi Prefecture. All of these ceramic workshops produce clay with a very high percentage of mineral substances.

The Japanese teapot is called Kyusu (急 須), while teapots from Yixing Cha-hu (茶壺) are called. Ceramics with a long tradition

The different types of clay, cause a different taste of the green tea during its preparation. This is due to unique interactions between the minerals found in the water and in the teapot. Iron oxidizes to magnetite when burnt under the supply of elevated oxygen.

On the other hand, hematite is formed when less or no oxygen is supplied during the fire. This means that with the same tone two completely different pitchers can be produced, which influence the taste of the green tea differently.

A row of teapots is produced with original black tone. With these it is the substance manganese that dominates this Kyusu. Manganese turns black, is supplied with oxygen during its fire. Even natural or mixed clay has different effects on the taste of the tea.

Banko and Tokoname should be mentioned here for their natural tone and their stoves. The reduction furnaces used in Banko work with reduced oxygen. Banko clay can withstand very high temperatures of up to 1200 ° C very well.

These high firing temperatures provide a porous clay, which in turn affects the taste of green tea during its preparation. The Banko clay and its brand provide a smooth, smooth and harmonious taste, no matter what beverage is prepared. Even the taste of wine is said to have a positive effect on a pleasure from banko clay pots. Far beyond the process of normal decanting. This is probably due to the 6-7% iron content in Banko clay.

Another benefit of an exclusive tea flavor is the ability to boil the water in a cast iron jug. The use of this boiled water causes more flavor intensity and gives a pleasant long-lasting aftertaste. For tea connoisseurs who want to try to increase taste intensity and aftertaste, try water preparation in a cast iron kettle.

Do not scrub the Kyusu with abrasive pads. Use soft or microfiber towels!

Do not use detergents. Rinse the Kyusu only with water!

Remove remaining tea leaves immediately after each use and then rinse the pot with boiling water!

Wipe the pot dry while it is still warm!

Kyusu made in Japan

The perfect green tea from a hagi-kyusu

In Japan, on the main island of Honshu, in Yamaguchi province, the ancient and unique city of Hagi is located on an island on the coast. Today, with almost 50,000 inhabitants, this almost mythical city plays a minor role in Japan, but Hagi was once a very important metropolis and home to the Mori clan. The remnants of the Hagi Joseki castle still bear witness to this fifth of this glorious time.

The perfect green tea from a hagi-kyusu

Numerous samurai and influential feudal lords called Hagi their home. There was a large area of ​​samurai in the city, and many temples along the Castle Undercity shaped the former image of this impressive Japanese city. Today’s visitors to Hagi can see Hagi’s beauty from the 17th century in the Jokamachi and Horiuchi districts on the Aiba Canal, as the old walls of that feudal period have largely been preserved.

In addition to Hagi’s ceramics, this is also a reason for the worldwide fame of this fascinating city. Many tourists also flock near the city on a mountain lying Toko ji Temple, the Japanese temple of the eastern light. This is also the burial ground of the Mori clan.

In the immediate vicinity is the tomb of the famous samurai Yoshida Shoin, a distinguished teacher and revolutionary, who was sentenced to death in 1859.

The distinctive and special ceramics from Hagi

However, not only because of its rich history, the city Hagi reached its fame, but also as a significant pottery and ceramic city. The ceramics from Hagi and the surrounding area are known beyond Japan’s borders and are used in many of the typical Japanese tea ceremonies. But even Asians love the unique pottery from Hagi, such as tea sets, vases, sake containers or figures.

Hagi ceramics are recognizable by their bright glaze with numerous small cracks, the crackle pattern known in technical language. The characteristic color and structure of the hagi ceramic results from a very special tone (the daidō tsuchi) and the unique firing process, in which pine wood as well as wood and rice straw ashes play a significant role. Hand-painted motifs on Hagi ceramics are rarely found.

The older a tea ceramics from Hagi is, the more noble is its appearance. The green tea, which is so popular in Japan and largely preserves its green color through special processing processes, gives the glaze its unique color. Back the hagi pottery probably goes to two Korean brothers, I Chak-kwang and I Kyung at the beginning of the 17th century.

Therefore, the earliest tea cups made in Hagi were merely copies of the Joseon dynasty tea bowls imported from Korea in Japan. Only in the course of several centuries developed the very characteristic and very own style for Hagi. Particularly popular objects from Hagi are the kyusu or various tea cups. Often ceramics of artists from Hagi differ considerably in shape or by different glazes, but for lovers of this wonderful ceramic the hagi-touch remains recognizable.

Red clay for the special taste 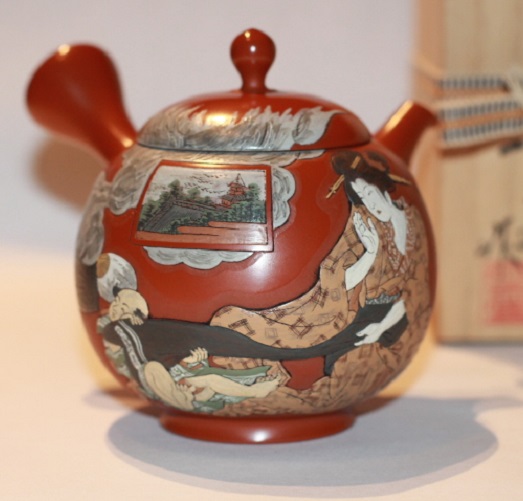 For tea connoisseurs and collectors of teapots from Japan and China, red clay is in demand and popular. The reason for this is the special property of red clay. A long-lasting, smooth and smooth taste and the ability to make any kind of tea, be it green tea, oolong or any other variety, make the hearts of any tea enthusiast beat faster.

Of course, there are high quality differences and different types of red clay, but all have a high iron content and lower levels of zinc, copper or magnesium. The firing temperature of a red clay kyusu is about 1100 ° C and, thanks to the smaller particle size, can be fired with these comparatively low temperatures. Despite the low firing temperature, a high porosity is retained in the red clay.

High porosity means that more iron ions are released into the tea.

In Japan, pottery workshops from the Tokoname region are famous for producing red clay teapots. An excellent ceramic master or potter, gets his tone from rice fields on which it is mined. The broad mass, however, buys the sound of traders or Japanese or Chinese sound associations. The different tones have different effects on the taste or aromas of the tea.

The prevailing opinion that any kind of clay has a positive effect on the taste of the tea is unfortunately not correct. Differently mixed or poorly mixed clay can have a negative influence on taste or aromas. Unfortunately, it is common practice to give iron oxide in white clay to produce a red color of Kyusu. In the production of this type of pitcher it can be assumed that a positive development of the taste will not develop.

The effect of mixing is that the jug loses its porosity and can not release iron ions. From our experience, red clay pitchers are not available under 30 €. Depending on the ceramic master, production method or location, the prices start at least from 30 € and find no upper limit.

Many people do not believe that the taste of their favorite green tea changes significantly when they make it in a Kyusu red clay. The cause of this interpretation is above all the concentration on the instant taste.